It's been HECK TICK round here lately.
In mid March I received an email from a New York Gallery, at first I thought it was one of those prank emails that come through every now and again, after reading it 3 or 4 times it sounded better and a little more believable.
So I eventually did what all good researchers do I googled it....and there it was as large as life ...completely 'ridgy didgy' as we say here in Australia.

I didn't quite know what to do as still a part of me said...'as if '...another part said... well ..stranger things have happened.....but after I dwelled on this for about 2 seconds I realised that nothing that strange was springing to mind.

You see this came completely out of the blue...I hadn't sent off random requests for gallery representations to the US of A. I did do that last year ....I sent out 10 Cd's with self addressed return envelops included to Gallery's in Brisbane Sydney and Melbourne on the off chance that one of them might give me a second look.
No such luck.
I received 2 replys ( by email CD's not returned.)
One from a Gallery in Brisbane which said they liked my work but didn't think it would fit in with the other work in their Gallery.
No sure what that meant.
The other said I basically needed to pull my head in and do a lot more work....maybe find a style...before I came back to them...this Gallery was in Melbourne. So of course I did what I always do with rejection....I slunk away with my tail tucked firmly between my legs and licked my wounds for a week or 2 then told myself to build a bridge and I continued on.

So here right before my eyes was a person called Mary who had the  title of Gallery assistant, asking me ...if I would like to put in a portfolio of my work for possible gallery represention....!!!!
Lets by pass Australia and go straight to the art centre of the world.

Since then it has been a rollercoaster ride with putting together and submitting a portfolio....waiting for what seemed like for ever for their acceptance.
Now they want work to go up on their on-line gallery...pronto!! (Australian for straight away)

Lucky I can do Pronto as I'm a pretty fast painter and I seem to be having a win with the stuff I'm pushing out right now....it is just the most amazing feeling to know that I'm painting for THE WORLD now and that the stuff I do has been looked at and 'seen' and accepted....I am soo grateful.

So moving on ...as I said in my last post I'm going to tell THE STORY of each and every painting or drawing I do from now on..so here goes 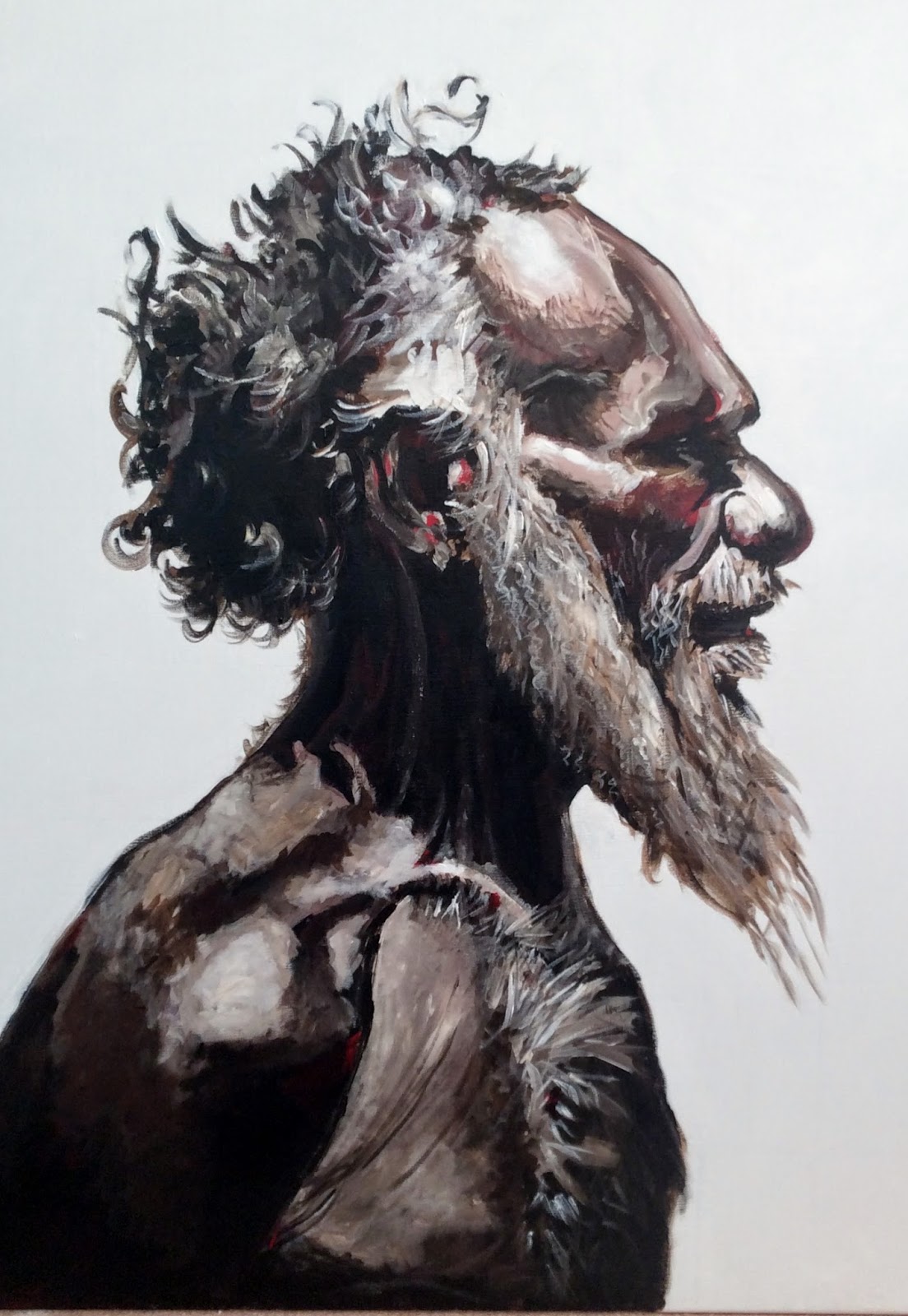 This is called " Guman", which is Aboriginal for Grandfather.I saw this black and white photo in a book that I found amongst a lot of old books I inherited from my mother's family. These relatives were two old aunts who were great readers. Their home library was very large and had some wonderfully interesting books. When it came time to share up this collection amongst myself and my sister's, I some how ended up with this amazing old book, the author was a man who had ventured out into the Simpson Desert to live and record the way of life of the Aboriginal people. He also took many great photos.

For some reason I find these old Aboriginal's so amazing...their faces are so interesting and so unlike any white face you will ever see. I have so much respect of them and for their love of the land and feeling for it. I also want to show people just how magnificent they were...so proud and strong.

This old man is to me truly magnificent ....I love how he is looking away into the distance...as I was painting him I was wondering what he was seeing.
The interesting thing about this work is it took me no time and the compulsion to paint it was very very strong.....strange as it may seem... some times I think the subject picks me and then helps me through the process...especially this one.


Before I started I had an idea that I would paint it with the one basic colour..Payne's Grey...which is a colour I love and use a lot, it is very versatile. But I started with another colour or a blended colour which I don't use much at all ..called Black/ Brown. I also put out some white and some cadmium red on my palette, other of my favourites.

So off I went.

All I did was add the white to make the various tones of the black/brown, then added some red to the mix every now and again. The eye was very quick and all it is just the full strength Black Brown in the centre and a tiny touch of watered down white in just the right place... got it right first time...pure accident. 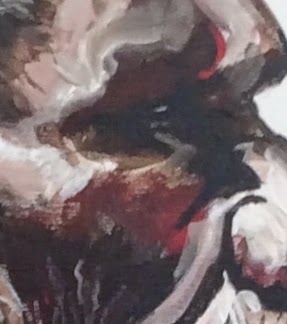 You can see that I added some straight red to his cheek and other small bits here and there... I just thought this would bring out these areas and also add some lift and drama to the whole thing.

I knew that it didn't need a back ground and that the stark white  and clean canvas that surrounded this old man was in direct contrast to him and his world.

And that is pretty much it.

This was also a painting that I knew without  doubt, when it was finished.
It was also one of the very very few paintings I know is good...or as good as I can achieve at this stage of my learning and development as an artist.
It was also a painting I needed to do at the time I did it. The reason for this is, I was feeling a little artistically inadequate and wondering what on earth I should paint for the New York Gallery....and out comes this painting...it answered these two nagging doubts straight away....you can do it, you are good enough and this is what you should do....
Life just blows me away sometimes.

Hence THE STORY is complete.
Posted by The Outback Artist at 19:20