ANOTHER TRIP TO LONGREACH

Just returned from another trip to Longreach to see my Dad who is in the old peoples home there.


I was joined by my son Bill his wife Kellie and the their new son Charlie, my grand son.


We took Dad to the Stockman's Hall of Fame and also to the show that is held at the back of the hall every day at 11am.

It is called the The Stockman's Show. It was extremely good and well worth a visit. 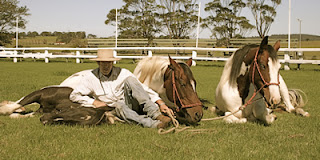 This is the bloke that does the Stockman's Show.
One of the horses he calls Red White and Blue Cavier!! 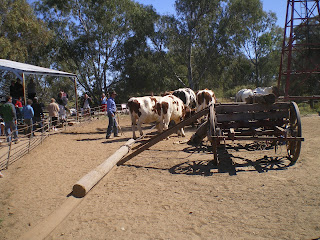 He does amazing work with bullocks

Dad was born and breed in Longreach.

And as happens quite often had been through the Hall when it was first opened some twenty odd years ago, but hadn't been through since. 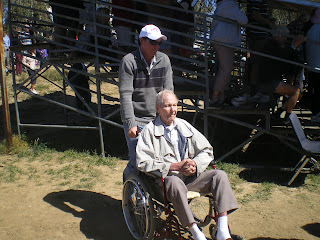 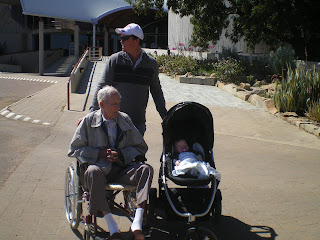 Dad is quite amazing as he has written 3 books about his life.

He loves to write and can remember things that happened years ago. He can even tell you the names of all the horses he ever rode, all the men he ever worked with , and being a great old sheep man you only have to hold up a random photo of a ram taken 50 years ago and he will tell you it's name and every ribbon it ever won.

Dad was born in the Longreach in 1931 and raised on a station called Strathdarr which is between Longreach and Winton .

This is the Strathdarr Homestead . Sadly it was burnt to the ground in the late 60's.

Interestingly I was born in Longreach as was Bill.

After settling Dad back into the home we drove to Isisford.

Isisford is a small town south west of Longreach

It is my husband Tony's hometown.
His father Dick McLean managed both Emmet Downs and Isis Downs when Tony was a child.
They are now owed by CPC.
It is interesting that when Dick was the manager of Isis there were up to 50 or more staff needed to run the 200,000ac property. Now due choppers motorbikes and the fact that Isis Downs now runs cattle instead of sheep the men it takes to run the place has come back to a very few.

I wanted to show the town and Isis Downs to Bill and Kellie as Kellie had never been there and Bill hadn't been back since he was a pre-schooler.
After Dick retired he bought the property Mt Grey at Emmet which is not actually a town but a railway siding  on the Blackall / Yaraka line. When Tony and I were first married we lived at Mt Grey. Tony's parents ahd bought the ajoining property Lone Hill and lived there.
Both Bill and Lucy were born while we were at Mt Grey.

The first thing we did on our arrival in Isisford was to have beer in one of the 2 pubs in the town.

When Tony and I were young and before we were married the watering hole where everyone from the surrounding large stations gathered was the pub with the iconic name of Clancy's Overflow Hotel.

Sadly it was closed so we had our beer and toasted our return  to Isisford in the Golden West Hotel.

From there we visited a tree which was planted behind the town hall in memory of Tony's father who was Chairman of the Shire from 1976 to 1984.

On the same plaque it was also in memory of Tony's brother Ian who was killed in 1976.
Next we drove out to the cemerty where Bill saw for the first time his uncle Ian's grave. 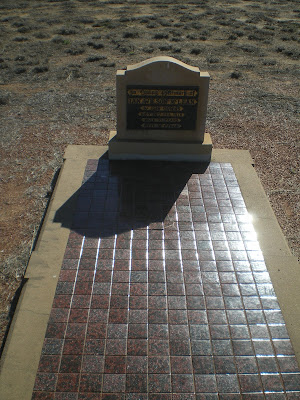 Ian was 21 when struck by lightening and killed while drafting sheep at Isis Downs.

From there we drove on to Blackall along the Paddy Behan Way.

On the way we called into Isis Downs which is only 20 odd k's out of Isisford.

We were in Blackall to attend the engagment party of my nephew Andy Picone , my sister Wendy's son.

There I met someone who actually reads my blog!!

I left Bill and Kellie and Charlie to drive home and they to drive home to Stratton Roma.
It was lovely to see little Charlie who is growing like a weed and as cute as a button.

Next time I see him will be at the Roma Campdraft where I will be baby sitting all weekend while Kellie works and Bill rides.

That's all for now as I am up to date

Just thought I would share the process of this painting with you.
It is called
FAMILY OF SWINGERS 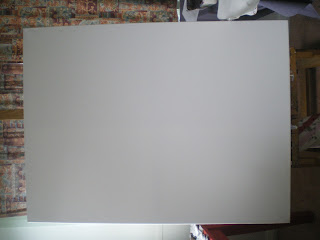 This is the dreaded blank canvas. It is quite large just over a meter long. 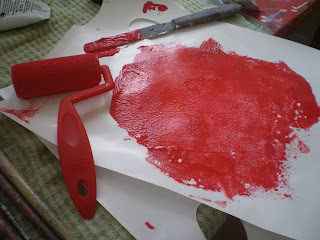 I don't usually use a roller but I did buy one some time ago.

I thought it would be a good and quick
way to cover a white canvas.

Some times I like to put down a base colour. I do this for
2 reasons.

No 1  To cover the daunting white.

No 2   To have that colour underneath so that it will beep
though the painting.

When it is finished  it helps to bring the whole thing together.

In this instance it was done for the first reason. 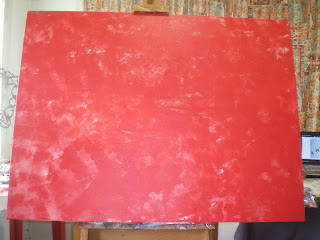 Canvas covered by the roller 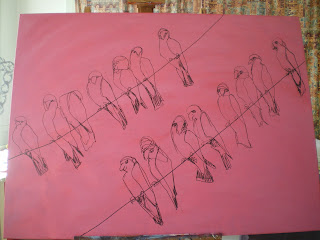 I then over layed the first colour with this pink

I then drew in the galah's with a permenant marker pen.
You can see this was done in a pretty rough manner, I do this on purpose as it stops the drawing from being too neat and controlled. I marked out the length of each bird and where they sat on the wire and then drew them in free hand. This takes some courage as you can ruin the whole thing if you balls up ...well not really but painting over will take time and a lot of paint!!

Have any of you noticed that birds such as galah's always face into the wind when sitting on power lines etc.

When I took this photo I wondered why they were all facing the same way, I even thought of changing them so that there were some with their backs to you.

But then I looked longer and as it was a very windy day, I realized that I really couldn't to that as that is not what Galah's do!!

See how their backs are very straight, this is I would think so that they can actually stay on the wire.
Just a little bit of trivia 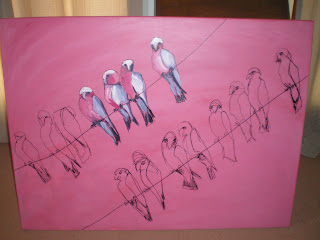 Here I have started to paint the birds 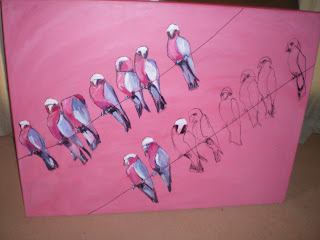 Still painting in the birds 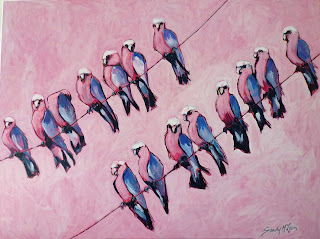 The end result.
This was eventually achieved by finishing the birds then going over the back ground with varying degrees of pink, until I thought I had the right contrast with the pink of the birds.

I also wanted to give the feeling of late in the day with the pink sky.

That's it for now

This painting is for sale $1,200.00. It is 92cm x 122cm.
Acrylic on canvas.
I ship world wide. Contact me through my website
http://www.theoutbackartist.com.au

I have had a very hectic few weeks, running about like a chook with it's head cut off!!

So it has been a while since I late posted....but better late then never.

I went to Warwick's Jumpers and Jazz Festival at the end of July I think it was the 29th.

This was lots of fun and very interesting. It is a huge market with lots of unusual and interesting handmade things on sale.

The park in the middle of Warwick where the market is held is a beautiful setting for this undertaking.
It was cold when we arrived but the sun was out and it turned out to be a wonderful day.

I did quite well selling my cards.

I have put together some news cards which I call my PINK CARDS.

That is because they are Pink !?

They are my attempt to raise some money for Breast Cancer. I did these featuring pink galah's. They were well received.

I really enjoy going to these markets because I get to talk to all sorts of people and it is always interesting to find some common ground with a complete stranger.

I also had my new Pink paintings on display.

When ever I have paintings up for people to look at the lookers will always tell you what they think of them and it also brings out the artists that are floating about, they spot the paintings and come over and start up a conversation usually about their own artistic experiences.

I love these talks as I don't get to speak to other artist very often.

I was lucky to have the company of my good old friend who is a wonderful cook and had spent the night before as I packed cards fussing around in her kitchen. I kept asking what she was up to..... just making us some lunch she'd say......

Well all day long she would produce another wonderful tasty treat from her rather large esky!!

I think my favourite was the chocolate coated strawberrys!!!

We also had another friend with us so we had a very enjoyable day.

If you have a chance to go to these markets next year it is well worth it.

I stayed with another friend in Toowoomba that night.

The next morning I took off for home (sounds like I'm flying?!)

I stopped in Dalby to have a quick coffee with my cousin and good friend, yes they can be both.

Then I drove to Chinchilla and stopped to fill the car and off again and then stopped in Taroom to grab some lunch and quess what......... no wallet.....left it in Chinchilla!!!!

There was only one thing to do and that was to turn around and go back!!

That only put another 3 and a half hours on the  already 7 hour trip!!

No comments from the peanut gallery Please!!

Thats all for now

Posted by The Outback Artist at 17:56 No comments: