We should be used to it by now...or rather we should have worked out how to cope better with it...you would think after all Australia is the driest continent on earth

.We should all have a ' strategy ' ( hate that word ) in place.....or finances arranged and set aside.

You know something put away for a 'rainy day'...or in this case a 'lot of non-rainy days'


I'm sure people away for the rural industries probably shake their heads and wonder why they basically hear nothing about matters away from the big cities .....until there's a drought...and then a wet-behind-the-ears journalist is dispatched from Channel whatever with a camera crew in tow to rush out to the worst affected area's and shove a microphone in the face of a poor over worked desperate and  destitute farmer and ask him ...wait for it...what is he going to do about this DROUGHT!!!!


I saw it last night on the news.....I felt so sorry for the poor fellow trying to answer the stupid questions and not cry. I felt sooo annoyed and frustrated by the reporter's lack of understanding and utter neglect for the position the man was in.

Let me try and explain what we have here.

We'll use a fictuious farmer and call him Joe Blow...Joe for short.

Up until 18 months 2 years ago he was chogging along making a living..not a fortune..just a living breeding cattle for the live export trade
...he had been doing this for quite a number of years and he and his bank manager had a mutual understanding. The bank lent him money to run his property and for his family to live until he mustered and wearned his calves from his cows.
Then these grown calves or wearners would be sold and exported.
He would receive money for the sale of his cattle which would go to the bank to pay off the overdraft .....and things would continue in this way year in year out.


When hard years came about and Joe was faced with a DROUGHT and he had to hand- feed his cattle to keep them alive he would go to the bank for more money and the bank would be happy to give him more because the bank would know that the market for his cattle.... eg the'trade' was there and even though the money per head would be less this year ...at least there was income coming in and hopefully there would be good years to follow to the take up the slack..so to speak.

Now..because the export trade was stopped overnight by some 'do gooder' ...another story.
Joe was suddenly left with no where to sell his cattle.
The complete lack on any income was bad enough....but many other hardships arose from this predicament.


....His land which usually ran say 1000 cows that had calves at a rate of 70%.
You never in that northern Australian country get 100% calving ...in fact 70% is probably stretching things a bit
...so Joe would in normal years get approx 700 calves..which grew up and were sold off.
But now that he was stuck with these unsaleable (calves ) wearners.
So now he is being forced to run 1700 head of cattle.
This causes what is called 'over stocking' and means the cattle eat all the grass available and when that is done the cattle starve to death.....unless the farmer hand feeds them at great expense.

Joe feeds them as he loves his cattle...in his own way...they are also his only way of making a living and he then has to go back to his understanding bank manager and ask for more money.
At this point the bank manager starts to become much less understanding.....he Joe has no way of repaying this extra loan to buy feed ..but the bank manager reluctantly lends him the finance. It's within his interest to do so...you see.

They both know this is the start of the end for Joe.

Coupled with this Joe has 2 children away getting an education at boarding school. This is necessary because of where his property is situated......500klms away from the nearest secondary school. The children were home-schooled by their mother until they needed to go to high school. These kids will now have to come home as Joe can't afford the fees or the travel costs. That's pretty much the end of their education...due to his lack of finances Joe can't afford payed help so the kids become his work force.

Joe has one option available to him and that is to take advantage of southern cattle markets.

The saleyards can take his cattle ...... As it turns out he is forced to send his young cattle south..if only to get rid of them off his property to relieve the over stocking situation and stop the need to hand feed his cows, and hence gain some control over his finances.

The closest saleyard is 1000klms away and the cattle are now not in very good condition to travel. The truck  trip takes 2 days. Half way into the trip the cattle are unloaded and rested and sometimes feed ( this depends on whether the stock agent in that particular town is prepared to get out of bed in the middle of the night or if he'd rather tell the farmer he'd done the job and charge him for the feed....how is he, Joe ever going to know if his cattle were feed or not.

When they eventually arrive they usually spend a few days in the saleyard waiting to be sold.

Cattle sold through the saleyard system are auctioned and  sold on weight ....cents per kilogram of beast weighted over scales.
So farmers try to get their cattle to the yard with the least amount of 'post and rail' or time spent in stock yards and off their normal pasture. Cattle will lose weight rapidly when under stress also.

As you can imagine Joe's cattle sale money didn't even cover the costs of the freight.

People have been asking..why is this drought worse than any other...including the 2000's one which in some parts of Australia went on for 8 years.

Because if you are Joe and he represents our northern cattle producers...you have been through all of the above and when you are well a truely on your knees you are hit with a drought and no money to fight it with.

Joe has not received any rain for 18 months. This drought has been coming on for all this time and Joe has for the past 3 or 4 months been hand feeding all his cattle. He is now past the point of no return with the bank and everything that is being spent is borrowed money.

Banks will lend the money to keep the likes of Joe going ...but only until the drought breaks and his property can be put on the market and sold so the bank can recoup it's investment.

He didn't say it was all over because he is a proud man like all men on the land ...they will give up with out a fight.

Some though are over the fight and just can't get out of bed and face dying cattle or dry dams one more day. ...these family's are walking off their places and leaving them to the banks...what's the point they say we don't own them !!


So when a polly in shinny new RM's goes up there to assess the situation and we see him on the ABC news picking his way carefully through poor ol'Joe's cattle yards trying not to stand on anything soft and squishy.... and holds a press conference while trying hard not to swat the flyes.....and tells how he is going to give X amount of relief dollars to 'keep farmers going through the drought' ...

Really as you can see by the above writings...it's like shutting the stable gate after the horse has bolted.

I personally think there is one sure way to correct this everlasting merry-go-round of drought..floods...good time and bad times.

WE NEED A FARMER'S BANK.

This bank would lend money at a very reduced rate....a rate that is low enough to allow progress and development to go ahead on farms. Also this would allow young.. go ahead... up and coming farmers to borrow money to buy their own farms. This is so important as the average age of farmers in Australia is 60+.


So many talented young people from farming family's are forced to go to the city's to work and the times where farms were passed on from one generation to next is long gone ..The older generation
is forced to either stay on the farm and die there.... or sell to retire.

There just isn't any money.

In answer to my question asked at the start of this rant ...

Why are farmers not prepared for droughts as we all know they are a regular accuracy  in this country.......??

I think I have answered that question 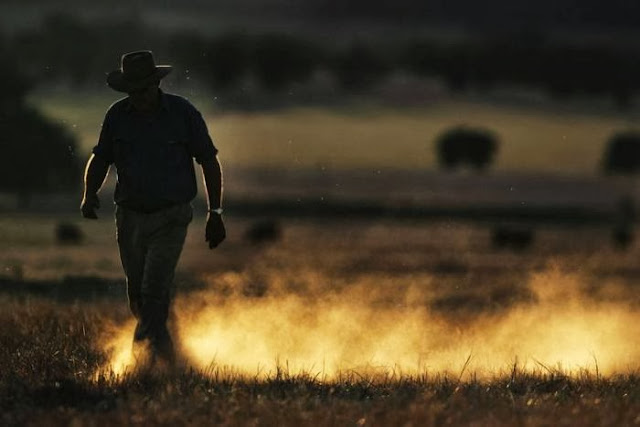 REMEMBER... You can view my paintings and drawings check out my website I will ship any where in the world
http://www.theoutbackartist.com.au/


Posted by The Outback Artist at 23:52 No comments:

WHAT DO YOU THINK?

Am I getting old and out of touch?

Am I the only person who is completely SHOCKED by the lastest work by one of ...I think....Australia's leading young artist?

S'pose by now your wondering what I'm on about


IT REALLY IS ABOUT SEX AND DEATH , IN THAT ORDER.... ISN'T IT.......Ben's facebook comment regarding this painting. 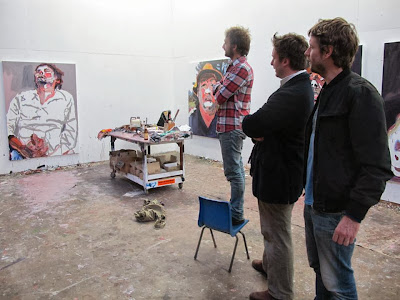 I just don't understand why this wonderful talented artist has to stoop to this deep depth ....it is I would think done to shock , which is usually left to the untalented and disparate among us.

He is the one standing on the chair.

...just had to have a bit of a soap box moment .....hopefully he has this sort of thing out of his system and he will continue to blow me away with his usual masterpieces. 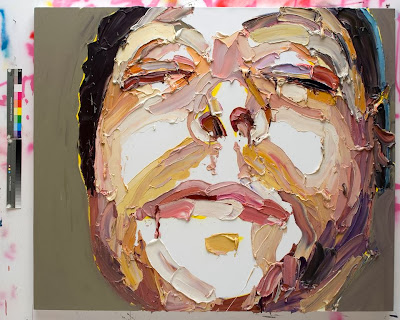 I love the way he slaps on the paint and how he leaves the bare white canvas for his light.

That's all for now
Posted by The Outback Artist at 21:20 No comments: